Everything you need to know about 3D

3D is a term covering a number of different technologies, which allow you to see things spatially or even touch them. 3D stands in contrast to the 2D: 3D photos to ordinary flat photographs, 3D movies to flat 2D films, 3D prints to flat prints. Let's see what you need for 3D - and how it actually works. 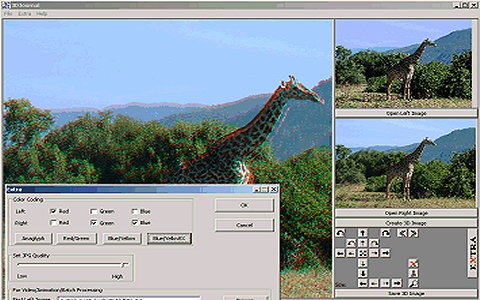 3D photos are images where you can see the scenes not flat, but spatially. Individual objects on the 3D photo literally stand out of the picture or are visible in its depth. To create a 3D photo is easy and it is possible even with an ordinary camera or mobile phone.

What you need for 3D photos: Just any camera - even the one in your smartphone. A suitable application which can use normal 2D photos to create a 3D photo. Unless you have a special 3D display or a 3D TV, you'll need 3D glasses. And if you want to create 3D photos often, you could buy a 3D camera.

Where to buy it all:

3D glasses: We recommend you to buy it in the famous Chinese shop AliExpress (search for anaglyph glasses or any other glasses you prefer), the price is about 30 cents for paper glasses and two dollars for plastic ones - including postage.

3D photo software: We recommend our program 3DJournal 3.2 (you can try the trial version here) 3D movies work similarly to 3D photos. When watching a conventional movie you are quickly shown many 2D images one after another - and you perceive them as a movie. For a 3D movie your are shown many 3D images. For your first experiments with filming you can use any pair of cameras, but for more serious work we recommend a 3D camera or 3D movie camera.

What you need for 3D movies: a 3D camera or a 3D movie camera. A suitable application to convert 2D movie frames to 3D movie frames. Unless you have a special 3D display or 3D TV, you need 3D glasses.

Where to buy it all: In the same places as the things for 3D photos. We should add that although 3DJournal program does not work directly with video, you can convert a serie of images in it automatically, so it is useful to experiments with 3D video.

Where to buy it all:

Google cardboard is available at AliExpress, it usually costs less than two dollars, including postage. The link is above.

VR camera: We do not want to recommend one model or one shop here, as the offer is rapidly evolving. It is a good idea to search new offers using Google.

3D printers allow you to print physical objects that you can touch. You can print for example models of cars, miniature figures of yourself and your family, spare parts. The most common printing material is plastic, but more expensive printers allow printing of objects using many other materials. It is assumed that the 3D printing will increasingly be used in medicine and in industry for printing of any objects for tests or even for final products produced in small series.

What you need for 3D Printing: Software, in which you design - or download - 3D objects that you want to print. A 3D printer. And the material which you use to print the objects. All this can be usually bought in one package. You can also buy 3D scanners for scanning of 3D objects into your computer.

Where to buy it all: There are many 3D printers on the market now. Well known is the Prusa Research company.

What you need for 3D graphics and where to buy it: There is a lot of 3D software available, paid and free, dedicated to various 3D operations. Whether it's creating of 3D technical drawings, 3D graphics or 3D objects for 3D printing. Just type your requirement into Google search engine. 3D graphics is supported by all common computers and modern smartphones.

3D games are the games that use 3D graphics. 3D games can be played on any modern PC and smartphone. However, some 3D games are computationally intensive and require more powerful graphics cards or a powerful smartphone.

Yes, 3D is a very broad term covering variety of techniques and technologies. But they all have something in common...

Comments, opinions and advice
Did you know that 3djournal.com is currently ranking for ~ 167 keywords? Out of these 167 very few keywords are ranking on page 1 of search engines. Here is 4 point action plan for 3djournal....
Hi! I hope that I'm not bothering you. My name is Paul, I'm a business development manager at Social Media Marketing agency NinjaPromo.io. I'm reaching you in case you're looking for a SMM team. ...
>>> Read and post comments <<<
©2003-2022 3DJournal.com
Publisher: Bispiral, s.r.o. | About Us | Rules of the 3DJournal.com web site and privacy protection